What is Bitcoin? A Simple, Layman’s Explanation

Before we talk about Bitcoin, let's understand cryptocurrency.

Cryptocurrency was conceptualized as an alternative to the traditional fiat-based (government-backed) currency system. Interestingly, the idea of cryptocurrency was proposed by Satoshi Nakamoto in a paper written around the sub-prime crisis in 2008, that rocked the financial world. Satoshi Nakamoto, the mysterious inventor of Bitcoin wanted to develop a P2P (peer-to-peer) cash system based on cryptography that was inherently secure, tamper-proof, and accessible to a global audience. He combined several prior inventions, including the concept of blockchain to create a decentralized electronic cash system not reliant on a central authority.

Due to the distributed nature of Bitcoin, there is no central server or a point of control. The traditional financial network payments are validated against a central server to prevent the case of double-spending; for example, if Amit has $100 in his bank account then he cannot send $100 to Barry and Chloe concurrently and the system would not allow him to do that because he wouldn't have sufficient cash to complete both the transactions simultaneously.

However, in a distributed decentralized system like Bitcoin, since there is no singular database to verify the transaction the only way for double-spending to be avoided is by a system of consensus. This system of consensus as conceived by Satoshi is one of the major breakthroughs and at the core of the Bitcoin system.

Bitcoin was first articulated by Satoshi Nakamoto in a seminal paper written in 2008 named Bitcoin: A Peer-to-Peer Electronic Cash System.

The Identity of Satoshi Nakamoto arguably the most important figure in the Bitcoin community is still a mystery. Nobody knows for sure whether Satoshi is a man, a woman, a group of people, or an alias for a government agency. On January 12th, 2009, Satoshi made the first Bitcoin transaction to Hal Finney, one of the earliest users and coders of Bitcoin. In April 2011, the value of 1 Bitcoin (henceforth referred to as BTC, its ticker symbol) was 1 US dollar. Today (as of 21st April 2021) this value exceeds well over $55,000, which is a phenomenal return on investment.

Interestingly in 2010, a programmer purchased two pizzas for 10,000 BTC in one of the earliest real-world Bitcoin transactions. Unfortunately for the developer, those 10,000 Bitcoins are worth over 550 million dollars today!!!

What is a Blockchain?

At the heart of the distributed ledger system is the blockchain technology where new and unconfirmed Bitcoin transactions are processed, validated, and recorded in a new block. The new block is eventually added to an existing sequence of blocks (dating back to the first transaction), in the form of a long chain and hence the name blockchain. The decision on the next new block that will be added to the blockchain is based on a consensus algorithm, and the most popular consensus algorithm is the Proof of Work (PoW).

In Proof of Work, actors in the blockchain network have to solve a complex mathematical cryptographic puzzle, and the one who finds a solution to the problem gets to add the next block. Most cryptocurrencies today that use blockchain technology uses the proof-of-work consensus algorithm.

Once transactions are added to the blockchain it is permanent and immutable, which means it can never be edited and remains in the blockchain forever for everyone to see and access.

In Bitcoin, unconfirmed transactions have to be validated, encrypted, and hashed together to form a block ready to be added to the blockchain. To add to that, as mentioned earlier, participating nodes in a blockchain network race to perform a highly complex cryptographic calculation to determine the encrypted code or the hash block based on the SHA-256 (secure hash algorithm, 256 bits).

Since this complex mathematical calculation requires significant work on the participating nodes and consumes a tremendous amount of CPU and GPU resources, not to mention electricity there is an incentive to solving this problem. The incentive is in the form of new Bitcoins that are generated as a reward to the winning solution provider. Since this is the only way a new Bitcoin can be created, it is called mining akin to mining gold, and the participating nodes are called miners.

The cost of mining has grown exponentially with time. In the early days, you could mine Bitcoin with a simple laptop in a few hours. Today we have reached a point of diminishing returns where you would need a highly specialized appliance (called an ASIC) like an Antminer S19 Pro that costs over $5000 and consumes over 3500W of electricity and can only mine 0.4 BTC per year (when it’s run non-stop).

How Many Bitcoins are Mined in a Day?

A new block is added to the blockchain approximately every 10 minutes (144 blocks per day), and an incentive of 6.25 Bitcoin is awarded to the miner responsible for the new block. As of writing this article, there are 900 new Bitcoins mined per day, the formula for this calculation is 6x24x6.5 where 6 is the number of times in an hour (60 minutes/10) it takes to mine a new block. 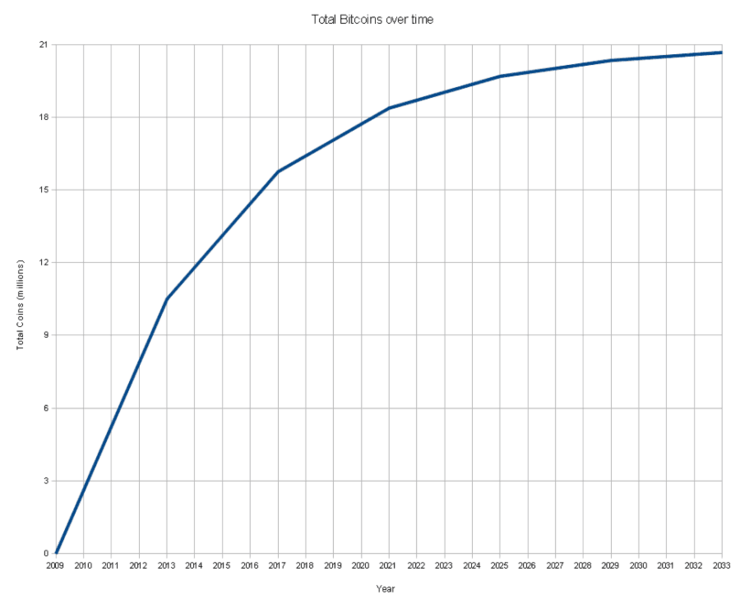 How Many Bitcoins have been Mined To Date?

How Long Does It Take to Mine a Bitcoin?

Let’s clear the misconception, you don’t mine a Bitcoin, but you mine a block of Bitcoins. As mentioned earlier, the new block of Bitcoins is rewarded as an incentive to the node that completes the computationally intensive cryptographic puzzle called a hash. In the early days a simple computer or laptop was enough to mine these blocks, today the process is so time-consuming and costly that in some countries the electricity bill alone offsets any chance of profitability. Regular computers even with the best GPUs (Graphics Processing Unit) are not just not viable enough. However, there is some light at the end of the tunnel. If you have specialized equipment tailored for mining called ASICs (application-specific integrated circuits), and if you own the best ASIC in the market you will be profitable.

Keep in mind though, ASICs are expensive and the best in the market retails at over $5000 and has a hashing power of 81 TH/s (tera hashes per second).

Alternatively, you can join a mining pool and lease out your computational power.

When Was the First Bitcoin Mined?

Just a few months after the quintessential paper by Satoshi Nakamoto, the first Bitcoin was mined in January 3rd, 2009. Block #0, now famously known as the Genesis block was time-stamped at 6:15 PM (server time) and mined by Satoshi himself (herself? themselves?). The reward for the first mine was 50 BTC. Interestingly, the second block was mined 6 days later on January 9th.

How Is a Bitcoin Price Determined?

In the case of Bitcoin, supply is limited because as was mentioned earlier, the Bitcoin system was designed to cap the number of Bitcoins mined to 21 million. 18.7 million Bitcoins have been mined (since the last update to this article), and there has been a sharp decline in the amounts of Bitcoins left to be mined due to the rate of exponential decay. The widespread adoption of Bitcoin over the years by both consumers and businesses alike, along with the limited supply has ensured Bitcoins are priced at a premium.

Some draw a comparison of Bitcoin with Gold, another rare and limited commodity. The Gold reserves are expected to run out by around 2039 and incidentally the last Bitcoin (the 21st millionth) will also run out by 2040. Except that in the case of Bitcoin, there are other cryptocurrencies that are serious competition like Ethereum nipping on the heels and could topple the dominance of Bitcoin.

Then there are factors like government regulations coming down heavily on the traceability and legality of transacting with cryptocurrencies. In India, for instance, the government is considering banning Bitcoin and other cryptocurrencies, and the fear of this impending action has affected the volume of transactions in the country.

What Exchange Is Bitcoin Traded On?

Due to the widespread popularity of Bitcoin, hundreds of exchanges exist today that let you trade Bitcoin with other popular cryptocurrencies like Ethereum (ETH), Litecoin (LTC), Binance Coin (BNB), Ripple (XRP) and even fiat currencies (government backed traditional currency). Among the most popular Bitcoin trading exchanges by trading volumes are Coinbase, Binance, KuCoin and Krakem. Between these 4 exchanges alone, the volume of trade is a staggering 60% and accounts for bulk of the liquidity and the eventual price movement of Bitcoin and other cryptocurrencies.

Coinbase, Binance, and Kraken also rank among the most customer-friendly of the exchanges and is relatively easier to trade on. Coinbase and Kraken are both based in San Francisco, California.

What Was the First Bitcoin Exchange?

In the fall of 2009, the first Bitcoin forum went online and attracted regular visitors to the website. One user by the name NewLibertyStandard expressed his desire to start an exchange for Bitcoins with real money, and this caught the attention of Martti Malmi one of the early proponents of Bitcoin. Martti had already proposed the idea of an exchange with Satoshi, and when he heard of it in the forum he was all too keen on furthering the idea.

In fact, he contributed 5050 Bitcoins to NewLibertyStandard to seed the exchange and got paid $5.02 in his PayPal account in exchange. Interestingly, the value of the Bitcoins was calculated based on electricity consumed to mine those 5050 Bitcoins. Nevertheless, this transaction and exchange was historical and set the ball rolling into making Bitcoin as popular as it is today.

How Do You Give or Get Bitcoins?

What Is a Bitcoin Wallet?

Technically, a Bitcoin wallet is a program in the form of a desktop application, mobile app, web application that monitors and interfaces with the Bitcoin blockchain ledger and updates a particular Bitcoin address’ account balance.

The Bitcoin wallet is authorized with your private key (a secret code like a password) using which you can send or receive Bitcoins. Remember, and this is important - the Private Key is what secures your wallet, and authorizes your wallet to send or receive Bitcoins. Think of the private key as the password to your net-banking account, one which you obviously protect and don’t share with anyone. Your Bitcoin address is the public key, like the bank account number that you will share with the public to receive funds.

How Many Bitcoins Have Been Lost?

Bitcoins like every other currency in circulation are prone to be lost or neglected. It's widely believed between 17 and 23% of Bitcoins (over $100 billion) have been lost forever. Interestingly many of the Bitcoins lost were coins mined during the early years of its inception when millions of Bitcoins were mined and intentionally neglected or lost forever because the price of the Bitcoins was insignificant. If only they could foresee the dizzying heights it would accomplish!